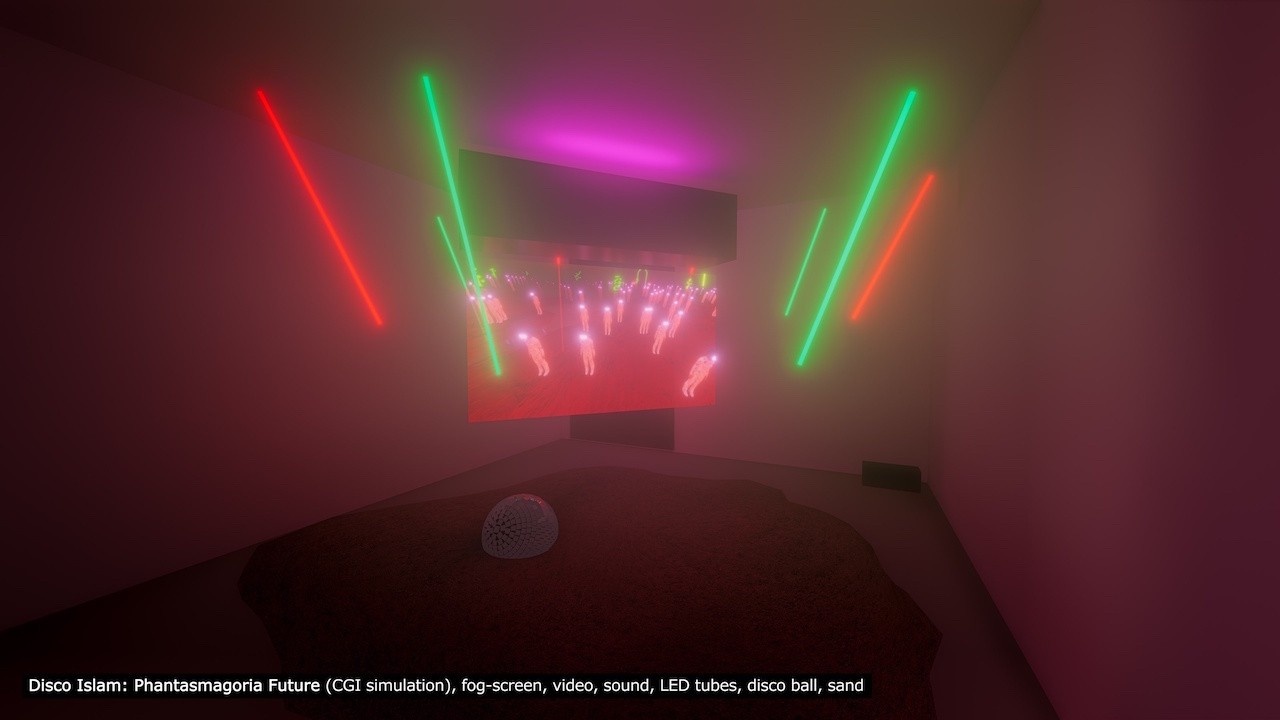 My name is Bijan Moosavi. I am an Iranian multi-media artist based in London. I call myself a Muslim entrepreneur and an Islamic Futurist. I make films, music, performances and installations which look at the implications of the expansion of neo-liberalism in the Middle East. My work draws upon the aesthetics of corporate advertising, sci-fi movies, popular culture and the Islamic Kitsch to tell dystopian tales of a fully neo-liberal Middle Eastern future.

My work demystifies the neo-liberal myth that the only way towards democracy and freedom in the Middle East is through the liberation of the market: from a film about a fictional start-up company with a mission to de-politicize the arts for an Islamic market (Future-Islam™: Musical Solutions, 2017), to performances by a fabricated rock band propagating Islamic values (The Future Islam Rock Band, 2018); and from a sci-fi commercial film about a nightclub built on the site of an environmental disaster in Iran (Disco Islam, 2020), to a lecture-performance in the form of a ‘business pitch’ inviting international investors in trading Middle Eastern human rights for profit (Disco Islam: How to Make a Cultural Investment in the Middle East, 2019).

Last year, I completed my ‘Disco Islam’ film with the help and support of the LCN Program at the SPACE (London), Forecast Platform (Berlin) and a residency at Delfina Foundation (London). Premiered at London’s Nunnery Gallery last October, ‘Disco Islam’ uses CGI, live-action and music to inaugurate the opening of the biggest nightclub in the Middle East in the future, built on the site of the dried ‘Urmia Lake’ in Iran, which was once the biggest saltwater lake in the Middle East. I am currently spending most of my time in my studio in central London, expanding this film into an immersive installation exhibition (more info below).

'Disco Islam: Phantasmagoria Future’ is an exhibition-in-progress parting from the ‘Disco Islam’ film projected onto a fog screen — a trending commercial technology using fog layers to make a walk-through projection screen. The exhibition also brings together elements from the club culture like a disco ball and diagonally suspended LED tubes resembling nightclub laser lights. All these elements are also placed over a layer of sand, covering the surface of the gallery and acting as a metaphor for environmental disasters.

As neo-liberalism becomes the dominant ideology of the late capitalist societies in the West, its economic policies are often prescribed by the IMF (International Monetary Fund) and the World Bank as the only way towards growth, freedom and democracy in the global south and the Middle East. To speculate on a perfect neo-liberal Middle Eastern future, ‘Disco Islam: Phantasmagoria Future’ takes up some of the key neo-liberal policies —such as privatization, deregulation, free trade, market competition, austerity, reduction in government size —, and feeds them through various aspects of the club culture (space historically associated with subversive freedom). In this way, the show turns the gallery into a neo-liberal Middle Eastern nightclub belonging to the future.

Replicating the aesthetics of the corporate world, I use elements of the club culture and the techno-utopian solutions from Silicon Valley. ‘Disco Islam: Phantasmagoria Future’ eventually creates a nightmarish smoke and mirror vision of a future nightclub in the region where the human rights violations of authoritarian Middle Eastern regimes are traded in favour of international business. In this vision, inequalities drive local crimes and are dealt with hovering ‘killer drones’; issues of dancing in Islamic law are addressed by turning people into ‘gender-less avatars’, while cultural censorship is dictated using AI. Finally, crony characters from the private sector ignore and sacrifice environmental catastrophes (such as regional draughts) in return for profit.

Welcome to ‘Disco Islam’: A Middle Eastern phantasmagoria from the future.

I am very much interested in having a conversation with a curator regarding the possibility of exhibiting this new project. I would appreciate your suggestions and I'd be very happy to discuss the project in more details with you.

Just drop me a line at [email protected] You can also find out more about my work through my website on https://bijanmoosavi.com or my Instagram page via https://www.instagram.com/bijanmoosavi/.